A Tale of Preservation and Family in Honor of National Grandparent’s Day.

The letters of Gene and Margaret (Maggie) Herbst have traveled far and wide in the name of love. Through 250 handwritten letters, the couple shared tales of their adolescence, war, happiness and longing. In more recent years, the letters have helped their grandson Eric form a relationship with the grandfather he never met.

In celebration of National Grandparent’s Day, The Crowley Company is sharing the story of the cherished love letters that introduced Gene to Eric and nurtured a unique understanding of his grandparent’s endless love.

Building Bonds Through the Written Word 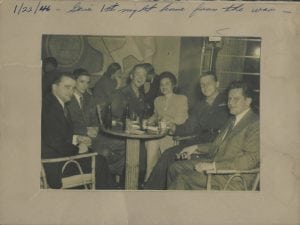 Both born and raised in St. Louis, MO, Gene and Maggie began exchanging letters while attending high school in 1936. The couple wrote diligently to one another from their homes across town and Gene sent letters every day they were apart during his family’s yearly summer road trip. The couple continued to exchange letters prolifically while Gene attended the University of Missouri 70 miles from St. Louis.

Decades later, their letters were given to Eric by his Aunt Joanie (Gene and Maggie’s daughter). Eric read the letters one-by-one and formed a deep connection to the stories and beautifully written words from Gene to Maggie, which made up the majority of the saved letters. Eric’s wife Kelly McNearney impresses that the letters are incredibly important to Eric. “His entire relationship with his grandfather and the long, funny and beautiful story of his grandparents’ courtship is contained in those letters.” Eric found that his skill with the written word as a professional writer and freelance journalist was come by honestly.

In a stroke of preservation and Christmas gift-giving genius, Kelly decided to digitize the letters as a surprise gift for Eric while simultaneously saving them from the ravages of time or possible natural disasters. A simple Google search led Kelly to Crowley Imaging, Crowley’s digitization services division. She enlisted the bureau to digitize the collection and shared with us the history of the letters and their significance to Eric.

Digitization: The Best Christmas Present Ever 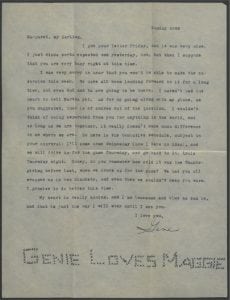 Living in Hermosa Beach, California, Kelly took the opportunity to covertly send the letters to Crowley’s Frederick, Maryland bureau for scanning while Eric was out of town.

“He looks at the letters at least once a week. If he discovered they were gone my surprise was going to be ruined. I was a complete and total wreck the day I shipped the box of letters to Crowley for scanning. If they were lost, damaged or stolen the memories would be gone forever and I would never forgive myself. The team at Crowley completely understood. They let me know the second the letters arrived at their facility.”

Each letter and its envelope were scanned using a large-format Zeutschel OS 12000 planetary book scanner. The Zeutschel’s LED lighting and line array scanning system ensured that the paper originals were digitized with gentle, specific illumination to avoid light damage. The 250 letters (approximately 500 images) were scanned at 400 dpi optical resolution and output as JPGs and multi-page PDFs. The images were then saved in chronological order to a USB drive and sent back to California along with the original letters.

“There was a short window in which we had to operate to keep the surprise. The Crowley team worked efficiently to get the images scanned, assured for quality and shipped in just four days,” remarks Meghan O’Brien, Senior Business Development Manage for Crowley Imaging Services. “The operators were like elves preparing that one last gift before Christmas.”

On Christmas day, Kelly presented Eric with the USB in a small jewelry box. “He was a little nervous when he opened the box. When I told him that it contained professionally-scanned digital images of every single letter from his grandparents it took him a few minutes to get it together. When he did, he said, ‘This is the best gift anyone has ever given me.'” Mission accomplished.

From St. Louis to Iwo Jima, A Love Story Blooms 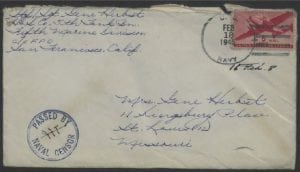 One of Gene’s letters timestamped February 18, 1945, the day before the invasion of Iwo Jima.

In one of Kelly and Eric’s favorite letters, Gene describes attending the Joe Louis versus Max Schmeling boxing match at New York’s Yankee Stadium on June 19, 1936 — an intensely important match for both boxing and politics due to the nationality and race of both competitors. Kelly elaborates, “He was only 15 at the time, but writes, ‘I saw something tonight that we’ll tell our grandkids about.’ Gene died before Eric was born, but through these letters, he did get to tell his grandkids about that night.”

The letter writing resumed when Gene deployed with the 5th Marine division of the United States Marine Corps during World War II. On February 16, 1945, four days before the battle at Iwo Jima, Gene wrote his sentiments to Maggie and Joanie (then just one-year old). From a boat in the Pacific, Gene wrote, “…I love you with all my heart and want to say again that I’m glad I’m here because I feel that I’m earning a full share of happiness for the three of us in the happy years ahead.” Ten days later, Gene writes that he survived but provides few details of the invasion. His location is noted as, “Iwo Jima, In a Foxhole [sic].”

Months later, Gene writes to Maggie that he is returning home. “We love that letter for obvious reasons,” says Kelly, “but also because he included a tear-out of a lingerie ad from a magazine, asking Maggie to buy something similar for his return,” Kelly laughs. “It’s incredibly modest by today’s standards; we find it sweet and endearing that he was such a cheeky fellow.”

Gene returned home to St. Louis in 1946 thus bringing an end to the letters.

Love Letters for the new Millennium 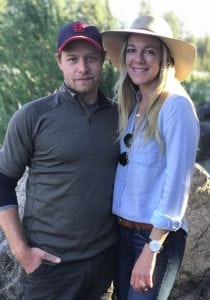 Gene and Maggie aren’t the only ones in the Herbst clan to use the written word to express their love. After being friends for nearly two decades, Eric wrote Kelly a love letter to declare his true feelings. The two were married in 2016 after two years of dating and a lifetime of being best friends. Now that’s a family tradition!

The tradition continues with a love letter of sorts that Kelly sent to Crowley. “I knew right away [Crowley] was the best fit because of their history of working in archival preservation and I loved that they were family-owned,” says Kelly. “I have more love for Crowley than is reasonable to have for a business. I have never met the team in person and yet they took the most important piece of our family history into their hands and gave us the best Christmas we’ve ever had. In addition to being wonderful people, the product is exceptional. These scans are flawless and now, no matter what happens to the [original] letters, Gene and Maggie’s stories are preserved forever. It’s something Eric and I hope to share with our grandkids.”

While Crowley’s specific focus is large archival and historical collection digitization, there is nothing as heartwarming as helping a family preserve their personal history. The fragility, scent and preciousness of paper love letters adds a certain poetry to their existence. The love within them may last forever, but the letters themselves are never quite as fortunate. We hope that one day Crowley has the honor of digitizing Kelly and Eric’s love letters, keeping the stories of the Herbst/McNearney family alive for generations to come.

LEARN MORE ABOUT THE DIGITIZING CAPABILITIES OF CROWLEY IMAGING

For more information on the conversion services offered by Crowley Imaging or the scanners that can be purchased for your own digitization efforts, please visit our website or call (240) 215-0224. General inquiries can be emailed to blog@thecrowleycompany.com. You can also follow The Crowley Company on Facebook, Twitter, Google+, LinkedIn, Pinterest and YouTube.