Home > Blog > Aperture Cards: The Last of an Art Form

Aperture Cards: The Last of an Art Form 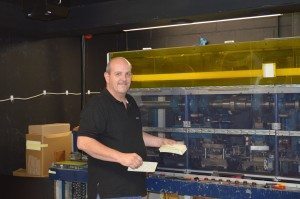 Nick Edwards, a 40-year company veteran, is one of the few specialists in the world that still creates apertures cards.

After embracing this fact through fantasies of royal successions (because the Wicks division is located in the U.K. and after binge-watching “The Crown” during the holiday season, I only know how to process a moment like this through visions of elaborate coronations), I realized that I didn’t know a whole lot about aperture card creation. So I set off to expand my knowledge.

I cannot say with absolute certainty that we are the only aperture card manufacturer in the world (although I kind of already did and a Google search for others proved fruitless) but I can say we may certainly be the most practiced due to the hard work and knowledge of resident “card chieftain” Nick Edwards. Nick has been designing and creating aperture cards with Wicks and Wilson for 40+ years. The long road could have diminished Nick’s passion for the craft but a brief chat with him proves that he is still enthusiastic to create a first-class product and spends a good amount of time navigating the details of each card order with precision and accuracy. Math, science, engineering and critical thinking skills are crucial when designing cards of this detailed nature and Nick’s expertise is expansive. His ability to process and conquer any card challenge is enviable, especially for those of us that aren’t mathematically inclined.

Before the aperture hole that holds the microfilm was introduced, tabulating cards only contained Hollerith punch data.

Punch cards in their roughest form were invented in the early 1800’s as a system to control loom weaving patterns by Joseph-Marie Jacquard. [1] Crazy, right? The technology was manipulated in different ways by various innovators such as Charles Babbage before Herman Hollerith created the electromechanical punch code around 1890.[2] Hollerith’s code became the standard language used on punch cards as we know them today.

Fast forward a few decades to the 1950s and the start of modern computers (because this is a brief history, remember?). If you love Katherine Hepburn as much as I do, you’ll probably remember her involvement with punch cards in the classic movie, “Desk Set” (1957). Katherine plays a clever reference librarian at the Federal Broadcasting Network that clashes with an efficiency expert hired to modernize the network, played by Spencer Tracy, who is working to incorporate a computer or “electronic brain” into the reference department, therefore rendering her job extinct. After many lines of quippy banter, the computer is installed (taking up the entire back wall of the office, I might add) and the reference librarians feed boxes of tabulating cards to the giant computer to “teach it” all the pieces of information contained in the library. The computer then reads the codes provided on the cards and retains it. Mr. Tracy explains the process pretty well in this scene (around 1:08).The cards that are being fed into the machine are known as tabulating cards and featured the 80-line Hollerith punch code. This code is read by the computer and the information retained in its system. Users decided they needed an easy, condensed and inexpensive way to transport and archive their images as well as information so punch cards were further adapted to include an aperture hole on the right side of the card where a microfilmed image could be placed.[3] For example, an automotive manufacturer wanting to copy and send all the technical drawings for their latest car model to a manufacturing facility on the other side of the country would need to physically copy and mail all the blueprints if they wanted to share the information. Once aperture cards were invented, the blueprints could be scaled down and the images transferred onto microfilm and placed in the cards. The cards would be easily duplicated and transported, therefore saving companies space and shipping costs by eliminating the need to ship large collections in their original form.

For decades, aperture cards were the preferred method of data storage for many industries due to their ability to be easily read, indexed, stored and quickly retrieved by computer. So why has the media fallen out of favor? In brief, digital technology. Once the internet created the immediate transfer of information, there was little need to send physical copies of the cards. According to Nick, 97% of the orders coming into our company today are placed by engineering companies in the automobile, aeronautics, naval, and aerospace industries who still prefer aperture cards for technical drawings. In some countries such as the United Kingdom and Germany, it is mandated by law that engineering companies save their drawings and records on some sort of microfilm (still the considered the longest-lasting media when stored properly). Which brings me to the question: How are aperture cards made? 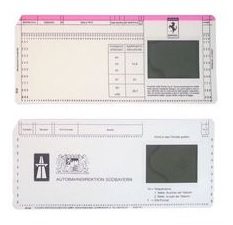 Because aperture cards are capable of holding so much information, there are numerous permutations in which the cards can be made. Nick sent me a document known as the “Microfilm Ordering Code” (below) that was not only helpful in expanding my knowledge of microfilm cards but also shows the amount of the detail that goes into creating them. Each batch of cards is defined by a seven-digit code that explains exactly how the cards should be made. The digits placed within each of these seven place values indicate the specification of that category, see below.

The first digit of the code indicates the type of card to be made. There are a few main types of aperture cards: tabulating cards (no aperture or microfilm image), mounting cards (card with aperture hole and no microfilm), camera cards (aperture card with unexposed microfilm) and plotter cards (aperture card with special microfilm for laser etching the image). The numbers 0-9 each indicate a different type of card and the type of film required. The type of film is designated by the customer and depends on the type of card they want and what machine it will eventually go into. Film types such as blue/violet diazo film, Kodak HQ1461, Kodak S0483 and black diazo film are the most commonly used and have their own digit specification. If a client would like to order a specialty card that uses a different film type, there is an option for specialty requests.

The second digit in the code designates the placement of adhesive for the microfilm and where the film emulsion is placed. Nick explained to me that aperture cards can either be a “master,” meaning that the card is the first card made with that information or a “copy” of a master. This digit placement indicates whether the card should be made as a master card or a copy card.

Type and Placement of Corner Cuts

The third digit in the code designates on which corner the cut is to be placed. Originally, a corner cut in the upper-left indicated that the card was a master while a upper-right cut meant that the card was a copy. This distinction fell away with the advent of aperture card scanners, the option is now up to the customer where the corner cuts are placed.

Confession time: Aperture cards appeal to me on an aesthetic level. There is something about their buttercream color, intricate printing, fat rounded corners and sharp corner cuts that fascinate me. The fourth digit in the code conveys the color of the card and lists one option … “buff natural,” but is that really the only color that cards are supplied in? The answer is more economically-based than you would think. According to Nick, alternative colors are available if the need is great enough. Paper suppliers will only supply different colors of card stock at the specific dimensions needed for aperture cards 6 metric tons at a time, meaning that a customer would have to order around 2 million cards in order for a color other than buff natural to be cost-effective.

Aperture card with colored stripe at the top edge.

The fifth digit in the code designates the color of a stripe. A stripe of color can be added to the card to highlight different information on the card and allow the user to quickly identify and index cards with the naked eye.

As you may have guessed, the sixth digit indicates where the highlight stripe should be located.

Once the cards are made, they are packaged and sent out to the customer who will put images onto the film and Hollerith code onto the card. The cards can then be viewed or digitized via an aperture card scanner (such as the C Drive X or the C400) or sent to a service bureau (such as Crowley Imaging) for digitization. How’s that for full-circle?!

Now that I know how the cards are made, I want to know more about the companies that use them … but that’s another blog for another week.