October is American Archives Month, a celebration of America’s history and the archivists, organizations and physical buildings that keep them safe and available to the world at large. Each week this month we’ll highlight a facet of how The Crowley Company partners with archivists and historians to help preserve and share American archives.

In a previous blog, we detailed the factions of the National Society Daughters of the Revolution (NSDAR) and the many ways in which The Crowley Company has partnered to preserve some of their most valuable society history. Nearly three years and two million images later, we’re back with an update on the NSDAR’s digitization progress.

What is the NSDAR? 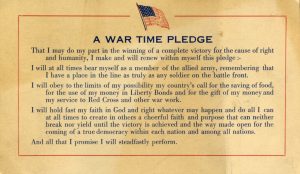 The DAR War Time Pledge, circa 1917, is a part of the NSDAR Archives’ Women of Resilience: DAR Service in World War I digital collection.

Founded on the tenets of historic preservation, education, and patriotism, the NSDAR embodies American Archives month. The NSDAR, most commonly referred to as the DAR, is a genealogical organization composed of adult women who have traced their lineage back to a single American patriot of the Revolutionary War. To me, this seemed like a shallow pool to wade in. How many of us can actually trace their lineage back 300 years? After a small search, I found that the DAR is currently 185,000 members strong and has admitted more than 950,000 women since its inception in 1890. Turns out more people can trace their lineage back than I thought – a possible credit to the diligent genealogical work of the DAR and other organizations such as Ancestry.com, FamilySearch and others.

Members work year-round to cultivate, maintain and preserve both archives and with the help of Crowley Imaging service bureau have been able to digitize a broad spectrum of information from varied types of media for the NSDAR archives, including:

Taking into account each material, its structural condition and eventual use, Crowley Imaging chose a variety of archival quality scanners for digitization such as Zeutschel planetary scanners for bound and fragile materials, Mekel Technology microfilm scanners for high-speed microfilm capture and InoTec 400-series document scanners for loose materials. 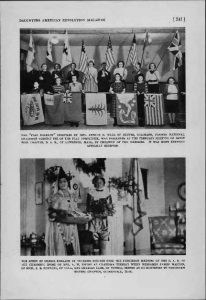 In a section titled “Chapter Work Told Pictorially” of the April 1936 membership newsletter, a “flag pageant” by the Lawrence, MA chapter and a yuletide luncheon (with some charming costumes) by the Clarksdale, MI chapter were announced to the society.

A unique aspect of the DAR’s organization is that they have volunteers performing their indexing and metadata work, a task that is traditionally carried out by Crowley Imaging Specialists. When DAR and Crowley began their partnership years ago, the original plan was to transfer DAR records to microfiche sheets. These sheets would be sent off to volunteers around the country for indexing. “We were essentially “crowdsourcing” our indexing efforts before there was even a term for the practice,” says Victor Kunze, DAR’s director of information systems. “Crowley suggested it would be more beneficial and cost-effective to digitize the materials, instead of writing them to microfiche, and put the images on a secure website for our 500-1000 volunteers to access and do their indexing and metadata work from. A decade later, technology advances have proven this to be a wise decision.”

The hours of indexing members devote contributes to the total millions of volunteer hours DAR members have completed so far this year. This also exemplifies how a solid partnership can lead to cost-savings. “Crowley revolutionized the way we do our archiving,” Kunze added. “Since that project, we’ve done countless partnerings with Crowley and have more in the works.”

Scanning in the DAR Library

The Zeutschel zeta features a variety of output modes such as scan to USB, email or print – ideal for those looking to capture, save and quickly share or store genealogical information found in the DAR library.

The Crowley connection goes deeper than just imaging services. Recently, the NSDAR upgraded their patron scanner offerings with the purchase of two Zeutschel zeta book scanners for public use in their Washington, DC library, which according to this informational video, the DAR Library is one of the top three genealogical resource centers in the nation. Previously, the DAR Library offered hinged-lid copiers which were harmful to original materials and did not offer the full range of editing features that book scanners such as the zeta and Crowley ODS do.

As the members of the DAR continue to do great works and keep American history alive, both within their chapters and their communities, Crowley is proud to take the journey alongside them. The stories that are preserved now will be the records that future generations look to for their heritage.

Interested in digitization services or scanners for your collection?