Life in the Fast (Scanning) Lane: Digitizing History Rapidly with the UScan+ 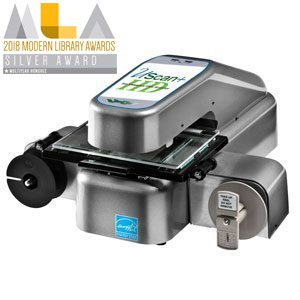 Ken generously purchased the UScan+ LTE for use in personal and community microfilm digitization.

If there is one thing you can say about Kenneth Shelton, it is that he is passionate about history . . . specifically, the history of his family’s hometown in South Carolina. This was remarkably clear to me when I first read about the volunteer scanning work Ken has been doing for the Fairfield County South Carolina Museum and Historical Society. We’re celebrating American Archives Month by sharing the story of Ken’s digitization efforts and dedication to preserving the past.

Since the start of 2012, Ken has spent countless hours of his personal time digitizing microfilm records covering land deeds, land plats, will and estate records, church records, newspapers and court records for the museum. Despite his passion for the project, Ken contemplated abandoning his digitization efforts in 2015 because of inefficient hardware. Instead of throwing in the towel, he purchased a UScan+ Series Universal Microform Scanner for both his personal use and his library project. Since then, he has increased his throughput rate by six times and has learned enough about the UScan + Series software to develop his own processes within the software to get the most out of his microfilm.

As a full-time systems engineer, Ken’s foray into the world of microfilm research came through his passion for genealogy and soon became an encapsulating hobby. Ken first encountered digitization while researching a skirmish called the Battle of Mobley’s Meeting House for his book,  All That Dare Oppose Them, commemorating the 225th anniversary of the battle. Ken’s strong family connection to the battle inspired him to delve into its history. His seventh great-grandfather, Edward Mobley Sr., was the founder of the Mobley settlement and Ken’s sixth great-grandfather, Benjamin Mobley Sr., was a part of the battle among other Mobley family members.

“The original site of the battle is not known now – just the site’s name,” said Ken, “but the exact spot has been lost to history. I’m trying to locate it and the best way is through land title tracing. This involves searching through a lot of deeds over the period of 1786 to the present. Because the Fairfield Museum had all reels on hand, it ended up to be easier and cheaper to digitize the entire volumes of the deeds than to continually order and re-order them on loan from The Church of Jesus Christ of Latter Day Saints (LDS) Library [which is how he originally started the research].”

Ken takes batches of microfilm from the museum, digitizes them, then returns the reels. All images are hosted on Ken’s webpage and he provides hard drives to the museum containing the scanned images. Patrons of the library frequently contact Ken with research questions on the history of Winnsboro and Fairfield County. The director for Fairfield County Museum, Pelham Lyles, praises the outreach that Ken’s project has given the community and beyond. “Ken’s volunteer digitization project has been hailed as a great resource for historical researchers online. The increased interest in our area’s genealogical storehouse of records has helped to promote the museum and heritage tourism to our town.” Fairfield County Museum Library’s Collection Manager, Eddie Killian, agrees, “Ken has been a monumental part of our digitization project and his effort and dedication has been nothing less than priceless.”

ine. The increased interest in our area’s genealogical storehouse of records has helped to promote the museum and heritage tourism to our town.” – Pelham Lyles, Director of Fairfield County Museum

In 2012, Ken purchased a Canon MS500* to begin digitization. While the unit provided suitable image quality, each frame had to be manually located and scanned. “Production was about one frame every 30-45 seconds after getting the settings finalized, but it could go up to one frame a minute if I had to adjust the settings.” After three years of this production rate, Ken’s labor of love simply became hard labor, resulting in his near-decision to give up on the digitization. “I had actually given up on completing [the research] in December 2015 because it was taking way too long to scan and save the images. It’s a manual process and it took three years to get through the deeds from 1786 to 1841.”

One Unit, Six Times the Throughput 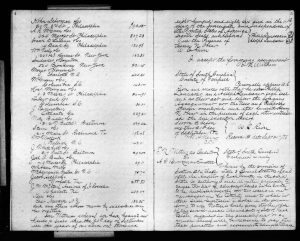 Ken researched other scanner options. To maximize his own time, he looked for a unit that was equipped with automatic scanning software. He chose Crowley’s UScan+ LTE model, which provided him with a competitively-priced unit. Ken customized the scanner by adding the optional Rapidscan software for automatic roll film scanning. “I scanned the next 55 years in six months on the UScan+. It was like night and day. With Rapidscan, I was able to leave the room for an hour, come back, and wait for the reel to finish out so I could stop the software.”

Getting the Best Out of the UScan+ Software Features

The microfilm records – which were originally scanned between the 1940s and 1960s – vary in quality. “The film technicians would frequently set the book askew, have the lighting wrong, etc. Lots of shadows from the binding and the edges also make the images difficult to read.” Ken has used the UScan+ software to the best of its capabilities to combat these quality issues and found several processes to improve the film’s readability.

Ken’s digitization of the Fairfield County South Carolina Museum and Historical Society microfilm records is estimated for completion in 2018. He has two other personal genealogical projects in the queue – Smith County Tennessee Records from reels purchased through the University of Michigan and Colonial French Illinois territory records loaned by the Missouri Historical Society  – once this work is complete. “I wouldn’t even attempt [these extensive projects] without the UScan+. It’s undoable with a manual scanner.”

We love it when a customer uses our scanners to share information that would otherwise remain in a vault. Thanks to Kenneth for sharing his findings with us. We look forward to hearing about his future efforts as well!

*The Canon MS500 has since been discontinued.

Questions about the UScan+ HD?

If you have any questions about the UScan+ (or any other Uscan microfilm scanner) and how it can best enhance your library, archive or corporate microform access and digitization efforts, please give us a call at (240) 215-0224.

The Crowley Company is a world leader in analog and digital imaging systems and services and is – to our knowledge – the only blend of manufacturer, distributor and service bureau in the industry. This dynamic combination allows Crowley to provide multi-layered solutions to the complexities of archival preservation and records management. The company has locations in Frederick, Maryland, San Dimas, California and Basingstoke, UK.