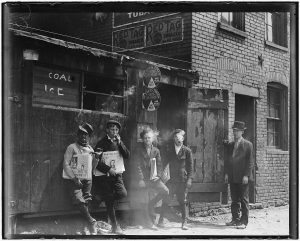 Newsboys during the strike of 1899. Photo credit: Wikimedia

Newspapers have great significance in modern societies around the world. Their thin pages have distributed our world’s heaviest news – the sinking of the Titanic, Kennedy’s assassination, September 11th – and have also followed slightly lighter stories such as the discovery of Big Foot (originally reported in 1858 as “wild people”). Either way, newspapers have been and will continue to be a gateway into today and a crucial key to the past.

From the humble origins of handwritten newsletters distributed between merchants during the European Renaissance to depression-era newsies on every corner of New York City barking “Read all about it!” to the current distribution methods of at-home delivery, news boxes and electronic inboxes, newspapers have crossed social, cultural, class, economic and other lines to broadcast the events of the day. Over the past decade, digital access has grown to break these barriers down even further by promoting public access to historic newspapers through internet databases and network portals.

Nearly four years ago, The State and University of Denmark (Statsbiblioteket) partnered with Aarhus University to create the Aarhus University Library (AUL) with the intent to do just that: preserve and promote Denmark’s cultural past through public access to its resources. Part of AUL’s collection of cultural artifacts includes The Danish Newspaper collection, Denmark’s archive of state and local papers. The collection contains a mix of physical documents and nearly 33,000 microfilm rolls. With the support of a Danish act on legal deposits (a program that supports newspaper preservation in the way that Library of Congress’ National Digital Newspaper Project does in the U.S.), AUL contracted Ninestars Information Technologies Pvt. Ltd. (Ninestars) to scan and process the rolls for digital use.

So Many Rolls, so Little Time 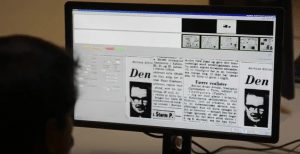 Ninestars’ task was – and is – to digitize 32+ million newspaper images in a five-year timeframe. The heavy workload and stern timeline left little wiggle room and Ninestars chose Mekel Technology’s MACH-series microfilm scanners to take on the heavy load. With a throughput rate of 700 images per minute, the MACH5 microfilm scanner was more than up for the job of producing accurate, high-quality scans fast.

As if the schedule of the project wasn’t pressure enough, all original microfilm had to be scanned without leaving Europe. The Mekel Quantum software suite provided Ninestars with the flexibility to scan images at a remote location in Europe with QuantumScan, send them to India via Ninestars’ flagship Clips on Cloud (CoC) software and have them processed using Mekel QuantumProcess software. So far, over 70% of the collection has been digitized and the project is on schedule for its 2017 completion.

It’s a privilege to look down the storied past of newspapers and see how far they’ve come, respawning in different formats to fit the ever-changing world. What was old, is news again.

The Crowley Company offers a range of patron and production level microfilm scanners. If you would like to hear more about our scanners, software or microfilm conversion services, please contact The Crowley Company by calling (240) 215-0224 or visit our website. General inquiries can be emailed to blog@thecrowleycompany.com

The Crowley Company is a world-leader in digital and analog imaging systems and provides an extensive number of digital document and film conversion services to the academic, publishing, commercial, government and archive sectors. The company has locations in Frederick, Maryland, San Dimas, California and Basingstoke, UK.