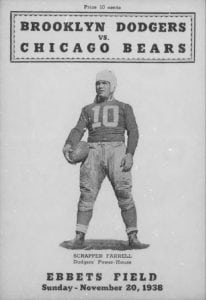 A media guide cover from a 1938 Brooklyn Dodgers vs. Chicago Bears game.

This week marks the beginning of the National Football League’s 99th season. With preseason kicking off Thursday night in Canton, OH and the 2018 Pro Football Hall of Fame (HOF) Enshrinement Ceremony on Saturday, it’s just about the most wonderful time of year for football fans! To celebrate, we’re taking a look at a different kind of special team, The Crowley Company and the HOF, and the partnership that made the digitization of 1.1 million microfilm and microfiche football records a reality.

For The Love Of The Game: Archiving America’s Football Greats

The Pro Football Hall of Fame’s mission is to: Honor the Heroes of the Game; Preserve its History; Promote its Values; and Celebrate Excellence EVERYWHERE. Archivist Jon Kendle emphasizes, “It’s easy to lump players into a single group, but each individual has a story to be told both on and off the field. They come from different backgrounds to huddle together and accomplish a singular goal. The Hall of Fame’s archive preserves their legacies for future generations.”

With nearly 318 players, coaches and administrators (commonly known as Hall of Famers) already enshrined and new Hall of Famers inducted every year, the Pro Football Hall of Fame keeps one foot in the past and one in the present (perhaps in the pose of the Heisman trophy?) to collect, preserve and share the legacy of every player and the game itself. Kendle notes that, “Over 100 journalists, writers, researchers and fans visit the archives in person every year seeking information while thousands of additional requests are submitted via email and phone. This makes our ability to reach information quickly key…but preserving the original material from overuse is paramount.” 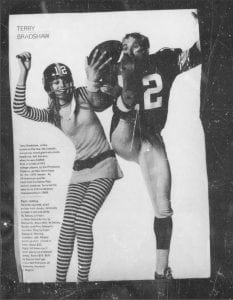 Member records include a variety of media coverage such as this fashion shoot featuring Hall of Famer, Terry Bradshaw.

The archive, located on the Canton, Ohio Hall of Fame campus, includes records from the National Football League (NFL) as well as other professional leagues such as the World Football League (which disbanded in 1975). The archive stores and maintains 40,000 three-dimensional artifacts in addition to countless documents, scrapbooks, news articles, photos and many other materials pertaining to the history of the game and each individual who built the game to what it is today.

Kendle continues, “The Hall of Fame’s number one digitization goal is dissemination, followed closely by preservation. Our work is much more than counting touchdowns and interceptions, but rather safeguarding the legacy of those that have made the game great. By making information accessible to fans, family and researchers we are keeping the legacy of the game alive in addition to preserving the materials that document its history.”

Regardless of team allegiance or player preference, the massive amounts of records have something to capture each fan’s interest. But what impresses Kendle the most? “The league meeting minutes give insight on the league founders and provide a peek at the roots of American football as we know it today. When I look at these documents, I see the stories behind the artifacts,” says the archivist. 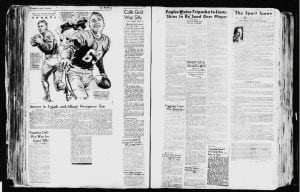 Image from one of Bert Bell’s microfilmed scrapbooks.

Not being much of a football fan myself, my interest was captured by culturally significant records such as a letter written by the first African American player and head coach of the NFL, Frederick “Fritz” Pollard, detailing his career to College Football Hall of Famer and sports historian, Colonel Alex Weyand. News articles on the Dallas Cowboys “Real Cowboys Don’t Carry Guns” initiative — a campaign which encouraged people to turn in guns in exchange for 1994 preseason tickets also caught my eye. There is something for everyone; football fanatic or not.

Many of the scrapbooks in the microfilm collection were originally owned by Bert Bell, NFL commissioner (1946-1959) who established the league’s draft system. Bell would regularly ask his secretary to keep news clippings throughout the league and place them in large bound scrapbooks. The original books are still kept in the Pro Football Hall of Fame archives. 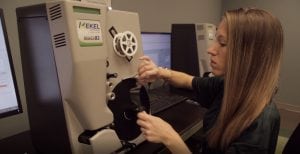 The microfilm was delivered to Crowley Imaging’s Maryland facility for digitization. The microfiche records were labeled with the first and last name of the player or member to which they referred. The player records kept on microfilm presented more of a challenge. Crowley imaging specialists manually identified and indexed the start and end of each member’s records on the microfilm roll in order to separate the records and create a searchable directory.

All told, approximately 1.1 million images were captured using the Mekel Technology MACH-series microfilm and microfiche scanners. Images needed to be digitized, processed and made into searchable PDFs within 45 days of material delivery, making the Mekel scanners an ideal choice for quick turnaround of high-quality images due to their well-documented speed and accuracy. The final files were output to grayscale JPEG and searchable PDF files using Quantum software.

In the spirit of widespread dissemination, the Pro Football Hall of Fame has eventual plans to make their digital records database accessible to all in a mobile app (might we suggest IMAGEhost?!). For now, the digitized records will be accessible to those visiting the archives as well as on-site staff fulfilling phone and email information requests.

As we enter a new season of football with all its hopes (rising and dashed!), take the time to remember the roots of the game and those that make it great. Plan a visit to the Pro Football Hall of Fame and be surprised, many of the best stories are the ones that you may not know yet.

Can’t go to the enshrinement ceremony? Tune into the event live on ESPN or the NFL Network. We’ll be sure to watch and wish many congratulations to this year’s inductees. Here’s to a long and happy archive!

Need to digitize your sports archives?

For more information on the digital and analog conversion services offered by Crowley Imaging or the scanners that can be purchased for your own digitization efforts, please visit our website or call (240) 215-0224. General inquiries can be emailed to blog@thecrowleycompany.com. You can also follow The Crowley Company on Facebook, Twitter, Google+, LinkedIn, Pinterest and