Home > Blog > Dear Mother: A Look at WWII Through the Eyes of One Family

Dear Mother: A Look at WWII Through the Eyes of One Family 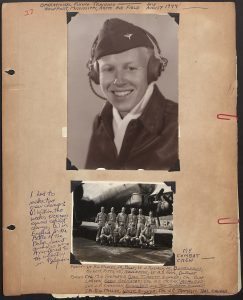 Many stories of heroism and national pride are brought back from war. More often than not, the airwaves are filled with the loudest stories: soldiers bravely flying the skies, nurses fighting the needs of their own bodies to save others and great minds working to break enemy codes. The quieter stories of everyday life during wartime are often overlooked, but are just as heroic. Such is the case with the Minker family of Wilmington, Delaware. Their story is one told not on the silver screen, but on fragile bits of paper that have traveled across the globe, back home to Delaware, stored for several decades and now available through digitization for the public to read and share. In honor of Veterans Day we share the story of the Minker Family and honor all military veterans and their families for their sacrifice and service.

One Family, Many Stories

In 1943, eighteen-year-old Ralph Lee Minker left college to enter the United States Army Corps. Ralph or “Lee,” as his family referred to him, exchanged letters with his mother, father and two younger sisters detailing the extensive training to become a B-17 pilot and his many bombing missions in Suffolk, England during World War II. Minker’s family sent him letters in return detailing their lives and the events in their home and around town. The correspondence, which spans from 1943 to 1945, tell a story of WWII that the history books cannot provide: intensely personal stories of a young man finding his way while fighting for his country, of teenage sisters navigating society back home and of two worried parents guiding and supporting each of them. It is in stories such as these that we see the endurance and strength of the American family in a time of turmoil. Despite the political landscape, they found a thread of hope and prosperity in each other to ground themselves during the difficulties of war. Ralph sent all the letters he received back home and asked his family to save them. Many years later, Ralph and his wife, Sandra, found the letters and decided to donate them to the Delaware Historical Society (DHS) for preservation.

A letter written by Bernice Minker to her brother, Ralph Minker, during the Battle of the Bulge. Courtesy of Delaware Historical Society.

The DHS decided that the letters would have the greatest reach when hosted on their website for all to read and sought a digitization partner to accomplish their goal. Through generous donations of time and money both from the Minker family and students at Dickinson College (the alma mater of several Minker family members), digitization of the collection was made possible. After careful research and vetting, The Crowley Company, with whom the society had worked with in the past to digitize medical minutes, was chosen for the job.

Due to the frailty of the letters, Crowley Imaging scan specialists used overhead document scanners, including the Zeutschel 14000, to digitize the collection at 300 dpi. Once digitized, the letters were processed for OCR/text recognition and sent back to the DHS in digital format.

The letters are now available for viewing on the Historical Society’s website. The digital collection also holds a copy of Lee’s scrapbook containing various photos, badges and news clippings spanning from his first army orders in 1943 to his participation in the dedication of the World War II Memorial in 2004. Letters from the collection have been compiled into the book An American Family in World War II, by Ralph Minker, Sandra O’Connell and Harry Butowsky.

The cost of freedom is not one easily paid. We thank all those who served and those still serving for their hard work and sacrifice.