Last August we received a plea via email: “We want a scan of four pages of a fragile 1841 newspaper that is approximately 16 7/8″ x 22 3/4″. I suspect this is too small a job for your company, but I thought I’d try. We are a small museum with a pitifully small budget.” How could we resist?

What Jane Rissler, director of the Jefferson County (W Va.) Museum and author of the email, didn’t know is that we keep our eyes open for the occasional pro bono project – something small, something of historic interest, something we can promote and, because we are a business, something that can foster a future relationship. This particular project fit the bill – or as it happened, the lack of one.

The newspaper in question was an original edition of the Morning Star newspaper dated February 10, 1841. This was not a newspaper tucked neatly in museum archives. Instead, it was an opportunity that – quite literally – fell from above. 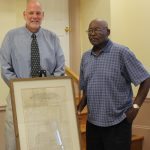 The newspaper was accidentally discovered by Dr. Darren Lisse, a Jefferson County physician, who was renovating a local historic home. As he pulled down an old horsehair ceiling as part of the restoration, the folded newspaper tumbled along with the ceiling. The paper was framed and for several years graced the walls of the renovated home. Eventually, Dr. Lisse contacted the Jefferson County Black History Preservation Society which was thrilled to learn of the paper’s existence and the document was transferred in a formal ceremony on July 14, 2016.

The Morning Star was published by the Freewill Baptists from 1826 – 1911. It’s original function was to disseminate the news and beliefs of the Freewill Baptist denomination. Under new leadership in 1834, the once-conservative newspaper made an editorial turn to promote the cause of abolition and met with resistance from both local government and its readership. By the publication of this 1841 edition, however, the call of freedom for all was widely embraced and the Morning Star became a flagship voice for the abolition of slavery.

On the front page of the edition discovered by Dr. Lisse, one can plainly see “N Brackett” in bold handwriting, giving this particular copy additional significance. Reverend Nathan Cook Brackett  was a Freewill Baptist minister who educated freed slaves and eventually helped to found Storer College in 1867, the only West Virginia college at the time open to African American men and women. Brackett was well-liked by all races and pushed forth the idea that African Americans could and should educate each other rather than rely on missionaries.

No Such Thing as Old News

Crowley Imaging used a Zeutschel large-format scanner to digitize and preserve the pages electronically. The overhead scanner uses a cool LED lighting system, a sophisticated software program and a low-pressure glass plate that is gentle on an original. A slight border was allowed around the newspaper edges to ensure that all data was captured. The images were delivered via thumb drive as 300 dpi color TIFF and JPG Q80 derivative files and also as a 300 dpi color multi-page searchable PDF document.

With the exception of the issue of slavery, it seemed to me as I perused the PDF that many of the articles found in this issue of the Morning Star are not that different than those on today’s news pages. Punctuation and formal language aside, it seems we may not have progressed as far in nearly two centuries as we think we have.

Here are a few excerpts that caught my eye (italics and topic heads are mine; the punctuation is original). You can read the whole paper here:

A large State convention has recently been held at Columbus, the capital—which, says the correspondent of the Philanthopist [sic], was ” a body of men, that for respectability and weight of character, clearness of intellect and argumentative talent, independence and fearlessness of spirit, and  determinateness of purpose, has never been surpassed by any other assembly of Citizens in the state of Ohio.”

The article reports on a number of resolutions made at the convention, including:

3. That slavery exists under the jurisdiction of the Federal government, that it uses the power of this government to extend its domination and advance its interests at the expense of the interests of free labor; that it has invaded the Federal Constitution, and violated some of the most precious rights of the people of this union; that it has operated most injuriously on the legislation and politics of the free states, and on the domestic and foreign policy of the nation.

The war with China is supposed to be ended, the “Brother of the Sun and Moon” having agreed to pay the English $15,000,000,and give them an island near Canton, if they would evacuate the Chusan group.—The tea speculators are in agony.

The war in Affghanistan [sic] has ended by the defeat and surrender of Dost Mohammed to the British forces.

Rum. A man by the name of Orcutt was found drunk in Concord a few days since by the police and put into a place for safe keeping till he became sober.

Congressional Doings, or talkings rather: for talk continues to be the order of the day. The debate over, not on, the Treasury Note Bill, in the House, has continued to the present time.

The article continues, mentioning the specifics of a bill and then launches into perhaps my favorite paragraph.

The only item besides, worth noting, we give in the words of the correspondent of the New York Evangelist.

“There was a rare scene in the House yesterday (January 21) occasioned by the introduction of an Abolition petition by Mr. Adams. The Speaker decided, that the portion of it relating to the non-admission of slave holding Territories into the Union, was admissible. An appeal was made from the decision of the chair. At length a point of order was raised, then another, and another; till at last the whole concern became so involved and entangled, that no one seemed to know precisely how matters stood; and a member sung out, “You are out of order all round!” And in fact, this member appeared to be nearer the mark than all of them.”

Today, the fragile newspaper is safely stored in the Jefferson County Museum archives with the hopes that a reproduction may one day be on display. For now, say Rissler, “We are caretakers for this loan from the Jefferson County Black History Preservation Society and are happy to be so. This is an important part of our local and national history.”

Below are several links to further enhance an understanding of how this accidental find fits into American history. As a side note, this year will see several celebrations of the 150th anniversary of Storer College’s founding, including a display at the Jefferson County Museum.

A black college closed in 1955, but its fading alumni fight to pass on a legacy (Washington Post Magazine)

About the digitizing capabilities of Crowley Imaging