Each February, Crowley highlights a digitization project that has bearing on Black History Month. Today we feature the newspaper digitization of The Reporter, which has been documenting the African American community in Akron, Ohio since 1969.

Past posts discuss an 1841 edition of the Morning Star, a Freewill Baptist publication that advocated for abolition, the digitized records of The Central Lunatic Asylum for Colored Insane and the research of tax assessment and slave records of Cecil County, Maryland.

From the Printing Press to the Personal Computer

The masthead and first headline of The Reporter’s inaugural issue. Courtesy of the Akron-Summit County Public Library via Ohio Memory

In this case, notes Mary Plazo, special collections division manager of the The Akron-Summit County Public Library, and Jenni Salamon, Coordinator of the Ohio Digital Newspaper Program with Ohio History Connection*, the archives came from the library…through the project donors…to the Ohio History Connection…to Crowley Imaging (as a subcontractor to the primary contractor)…and back again.

Explains Plazo, “The idea for the digitization of The Reporter started with my predecessor, Judy James. Sometime in 2015 she had invited Jenni (Salamon) to the library for a presentation on newspaper digitization. That presentation sparked the idea to pursue digitization for The Reporter, which was being held in our special collections. Judy then researched how the library could partner with Ohio History Connection, gathered costs and began fundraising.” A $10,000 grant from the Dick and Chris Chenoweth Fund of the Akron Community Foundation laid the groundwork for a $16,000 campaign. The newspaper digitization project was up and running.

Salamon picks up the story. “Although Akron-Summit has its own digital library, it made sense to partner on The Reporter because the Ohio History Connection had the ability to take the project from start to finish, with the end goal being to host the digitized images on Ohio Memory.” Ohio Memory is a free website and the statewide digital library program of the Ohio History Connection and the State Library of Ohio.

When asked why The Reporter was chosen for newspaper digitization, Plazo is enthusiastic. “We always want to choose resources of significance to which people don’t currently have access. The Reporter documents the history of Akron’s vibrant African American community. It is an invaluable resource of the events, organizations and people that have helped to shape this specific community that would be otherwise lost.”

The Reporter was founded as a response to a lack of coverage in the mainstream press. News and events specific to Akron’s African American community always has the lead. Courtesy of the Akron-Summit County Public Library via Ohio Memory

She continues, “Now, with just a keystroke, you can follow Carla Moore, the first black woman to be elected to the Ninth District Court of Appeals. Or Mr. Ellis, Sr. the founder and publisher of The Reporter, who was fascinating in his own right. Patrons can learn about the history of an event or a location. They can research both Akron’s notable figures and those newsmakers who might be family members or neighbors. To have all of this information in one place is a treasure – not just for the African American community but for our Akron community as a whole.”

“Any time that the Ohio History Connection can help a library post a collection online, it’s exciting,” says Salamon. “In this particular instance, it’s been rewarding to see how enthusiastic the community and The Reporter staff has been about having the newspaper archives available. Not every newspaper publisher is able to preserve and share their back issues electronically. It’s satisfying to be able to aid in this effort.”

The Reporter archives were a mix of microfilm and original newspapers. All of the back issues of The Reporter were earlier preserved on microfilm. For this newspaper digitization project, the images were scanned from microfilm, with the exception of a dozen or so issues that were missing from the original microfilm rolls. Those newspapers were made available in hard copy.

The hard copies were scanned by OHC personnel using a Zeutschel 12000 A1 book scanner purchased from The Crowley Company in 2015. Zeutschel overhead book scanners are well-known for their ability to produce high resolution images from large format materials capable of meeting National Digital Newspaper Program digitization standards. A preventative maintenance contract is in place to keep the scanner calibrated and in top working condition. 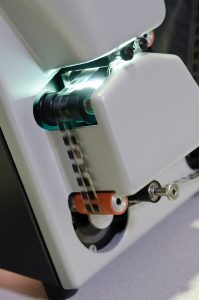 The Mekel Technology MACH-series microfilm scanners were used to digitize images of The Reporter from preservation microfilm.

The microfilm rolls were sent to Crowley Imaging to be digitized on the company’s industry-leading Mekel Technology microfilm scanners. The rolls were scanned in Crowley’s service bureau and then processed by the primary contractor per the agreement with the Ohio History Connection.

Once the images were posted online, Salamon took a trip back to the Akron-Summit County Public Library. Speaking to a full house of library patrons, community members and newspaper staff, she shared a presentation on the Reporter newspaper digitization efforts and how to best search its database.

Today, all issues of The Reporter from 1969 to 2016 can be found on the Ohio Memory website, preserving the history of a community, a town and eras gone by.