Home > Blog > From Gunsight Cameras to Microfilm Scanners to Whatever’s Next: Mekel Technology plays on for nearly 50 years

From Gunsight Cameras to Microfilm Scanners to Whatever’s Next: Mekel Technology plays on for nearly 50 years 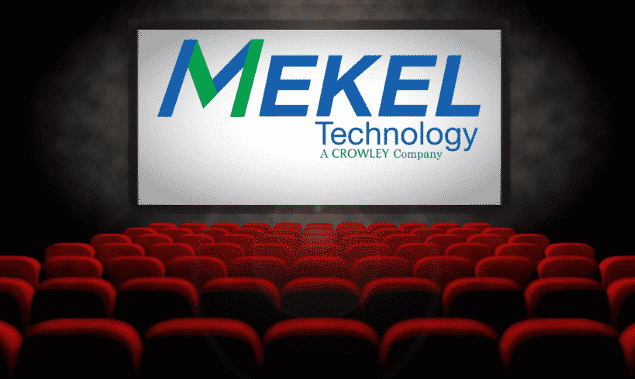 You’re channel surfing and a movie catches your attention. You’ve missed the beginning but you pick up enough to be thoroughly engaged and end up watching the whole thing. Ever happen?

That’s a good analogy for my journey with Mekel Technology (Mekel). I’ve worked at The Crowley Company for over a decade and know a fair amount about our Mekel product line, but I missed the beginning. With the advent of Mekel 2.0, the latest iteration of Mekel Technology scanner software, it seems a good time to (re)discover our Mekel roots.

To recap the company’s history from an earlier blog post, Mekel Engineering, as it was originally known, opened its California doors in 1972. Always involved in some form of imaging, Mekel was known for manufacturing 16mm gunsight cameras, custom equipment and custom film transports. The gunsight cameras, also known as HUDs (Head-Up Displays), were used to record the flights of fighter aircrafts and NASA shuttle flight trainers. The transports were used in laser image recording/analyzing devices such as film analyzers, format converters, graphics cameras and more. 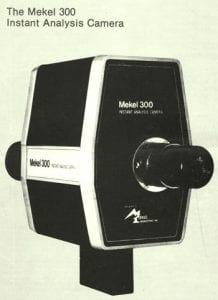 Jeff Helm, Crowley’s chief mechanical engineer for the Mekel product line, started with the firm part-time in 1977 and became full time in 1982. His first project was to make parts for the Mekel 300, a high-speed Super 8 movie camera that used Polaroid Polavision film, often used for scientific filming. Inserting the Polavision cassette into a Polaroid Polavision Player developed the film nearly instantly and a filmmaker could watch his or her film 90 seconds after shooting – an incredibly fast turnaround, even by today’s digital age standards.

In a natural evolution of its varied imaging technologies, Mekel Engineering introduced the M400, the world’s first production-level microfilm scanner in 1989, followed closely by the M460, the world’s first auto-load microfiche scanner in 1991. According to Helm, “Maurice Amesbury, the company president and co-founder, was the brain behind the idea of scanning film.” Having passed in 1997, Mr. Amesbury does not have an easy digital footprint to follow, but I did find two relevant patents.

In the mid-90’s, the firm was acquired by Metters Industries (now closed) and later sold to Houston Fearless 76, Inc. In 2003, Mekel Technology, as it was now named, was purchased by Crowley Micrographics (dba The Crowley Company) and became the staple of our manufacturing division. 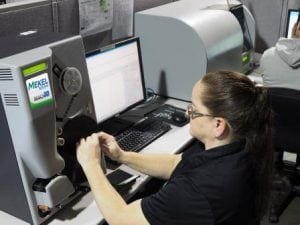 The Mekel MACH-series microform scanners are respected worldwide for their speed, accuracy and image quality.

Today the Mekel Technology scanner brand is known worldwide for its microfilm and microfiche scanning speeds, image quality, reliability and ease-of-use. The scanners are heavily used in libraries, archives, corporations and government entities that have large collections of microform to digitize and preserve.

In addition, Crowley uses Mekel scanners in our own digitization services bureau, allowing us to experience the scan systems and software in the same way as our end-users. Hiccups in the field, custom adjustments and ideas for advancements are easily funneled to engineering and manufacturing for quick turnaround or future research and development. As the only manufacturer/end-user in the industry, we see this as a distinct advantage for our clients.

Having worked with the design and manufacture of the scanners since 1986, Helm notes that the difference of today’s scanners from their original build is “night and day.” He recalls that “the first useful scanning software ran on Windows 3.1 [circa 1992] and bitonal TIFF was the only image format available.” Since then, the progression has gone from bitonal to grayscale to ribbon scanning and images can be saved in nearly every available format type.

Paul Higgins, a Crowley software engineer, has been designing software for the Mekel line since 2004. “I had no idea I’d be with Crowley for so long. None of the current generation of scanners or software existed when I started. Since then, we’ve progressed from FilmScan to FastScan to QuantumScan for microfilm and FastFiche with QuantumScan for microfiche.” The Quantum suite is delivered with QuantumProcess, which allows for image editing and processing to be done simultaneously or separately from the scanning process as desired for maximum production efficiency.

Over the past 15 years, notes Higgins, “the most significant change has been the transition from individual image scanning to continuous strip or ribbon scanning. “

With the recent releases of the MACH Mini and Mekel 2.0, Crowley builds on the desire to continuously improve. The MACH Mini harnesses the production capability of Mekel’s higher speed scanners in a smaller, stackable case. In Mekel 2.0, serpentine capture for microfiche, which increases scanning efficiency even further, and the ability to OCR documents and images on all MACH-Series models using Quantum software are perhaps the most dramatic new features. Not so obvious tweaks to existing capture and editing options are further steps toward operator efficiency and more money to the bottom line of the scanner investment.

Helm, Higgins and the rest of the Crowley team in the Mekel division see continued improvements and new products for the line.

“Crowley is building long lasting products and is in it for the long haul,” answers Higgins when asked what sets the Mekel scanners apart.

He’s also excited about IMAGEhost, Crowley’s custom microfilm and microfiche hosting platform, which was a design departure for him. “Previously, my software development was focused on applications and user interfaces for hardware control. IMAGEhost is web-based and stretched my skill set.” With IMAGEhost, individuals can view microfilm rolls or microfiche sheets in their original format from any internet-connected personal computer, tablet or mobile device.

Still enthusiastic and with more than four decades invested, Helm continues the Mekel legacy of invention and innovation for The Crowley Company and its brands. He is busy designing everything from scanners to camera stands to document examination tools for the security industry…and never says no when approached with a new idea.

Have a question about our Mekel Technology or other microform, book and document scanners and services? ? Ask your Crowley Company representative today or call (240) 215-0224.